This is actually January's "Lesser Legend." I'm redrawing December's, and she'll be along shortly (hopefully). 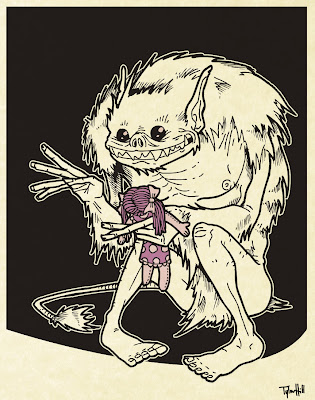 Some beasts want to eat children,
others take the old,
some feast on the feeble,
and others on the bold.

Some monsters sink mighty cruise ships,
and others burn down towns,
still others laugh and cackle,
and look like malevolent clowns.

Some phantoms lurk under beds,
and others in the woods,
some rob you at knife point,
and make off with your goods.

The worst creatures like to cause pain,
in your joints or in your head,
that’s often much, much crueler
than the ones that make you dead.

But not the shaggy Bagbog,
though as fearsome at its seems,
it does not wish to hurt you,
it has much nicer schemes.

It simply wants your old toys,
forgotten for the new,
it wants to love and care for them,
and watch over them for you.

When I was little, I was one of those kids that got really upset and stressed out when I realized that one of my toy's had gone missing. I think the Bagbog is my attempt to come to grips with that. Much nicer to think that my toy is out there being loved and played with by some benevolent beast.
Posted by The General at 9:38 PM