Finally wrapped up December's Lesser Legend. I'd actually ended up drawing her three times before coming up with an illustration (and way of handling the Christmas lights) that I was happy with. I'll hopefully get February's Legend up in the next week or so. 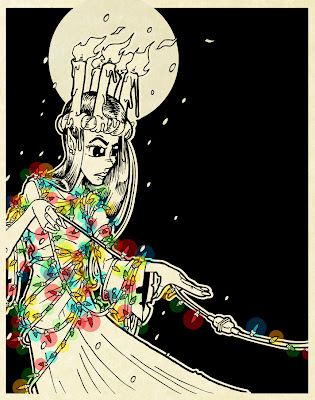 The wandering, ethereal Kerzemaid,
with her candle-covered crown,
though she is unapproachable,
you may spy her on the edge of town.

When the nights are darkest,
and snow is in the air,
she illuminates the deepest woods,
wax running through her hair.

But in recent years this maiden,
she has quite often found,
that her candles are inadequate,
with all the Christmas lights around.

But rather than be defeated,
she will only be made stronger,
the Kerzemaid now has lights of her own

...if only the cord was a little longer.

Also, if you haven't already, I highly suggest you head over to the Bureau of Drawer's blog, and download the first volume of our new, quarterly e-publication. I wasn't able to participate, because of the usual list of excuses, but I think that everyone else did an excellent job, and it's already received favorable write-ups from sources as varied as The Strangers' Slog and Comic Book Resource. Check it out!
Posted by The General at 8:52 AM