Here's the illustration that I did for the Bureau's Annual Halloween Show at Cafe Racer. This year's theme was "Bad Omens," but I ended up having an idea jump into my head sort of last minute and had to get it out on paper. 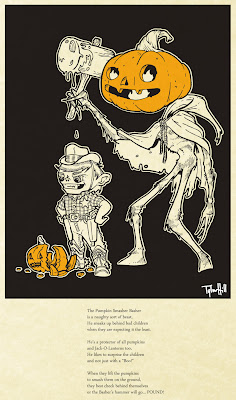 Even in my teen years, I never really understood what the appeal of pumpkin smashing was. Taking things that other people (often children, or their parents) cared for and smashing it out of some sort of sense of misdirected rebellion. So, I was amused by the idea of creating a mythical character called the Pumpkin Smasher Basher: A giant pumpkin-headed monster who sneaks up behind pumpkin-smashing youth and -in turn- bashes them of the head with a giant wooden hammer. The poem I wrote to go along with him goes like this:

The Pumpkin Smasher Basher
is a naughty sort of beast,
He sneaks up behind bad children
when they are expecting it the least.

He’s a protector of all pumpkins
and Jack-O-Lanterns too,
He likes to surprise the children
and not just with a “Boo!”

When they lift the pumpkins
to smash them on the ground,
they best check behind themselves
or the Basher’s hammer will go... POUND!

Anyhow, I like the idea, and hope he ends up standing proudly next to the Santa Claus and the Easter Bunny.
Posted by The General at 4:53 PM