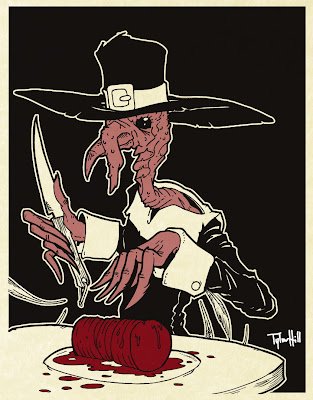 The second in what I'm planning (read: hoping) will be a 12-part series, the Pumpkin Smasher Basher being the first. These Lesser Legends are a group of seasonal characters who live in the shadows of the Big Guys, like Santa and the Easter Bunny.

And, the poem to go with him:

Gobble, gobble, gobble
On that first Thanksgiving day,
when the Puritans and Indians
did bow their heads to pray;
One ungrateful fellow claimed
he had nothing to be thankful for,
Oh, turkey and gravy he did not like
and even cornucopias were a bore.

Gobble, gobble, gobble
This did not go over well,
and either a witch or wise man
cast a nasty spell;
He grew a beak, could no longer speak
and with feathers from his back,
he was not forever hungry
if only for a snack.

Gobble, gobble, gobble
If it’s your next Thanksgiving meal,
and your favorite course goes a missing,
then the Gobbler’s made his steal;
He lurks and hides in cupboards,
or under the kitchen sink
and hopes to make off with
a little stolen food and drink.

Gobble, gobble, gobble
So let this be a lesson to you and you
best be thankful on Thankgiving,
or the Gobbler will
EAT YOU TOO!
Posted by The General at 2:28 PM